The Letter of Support for Kaunas Pride March 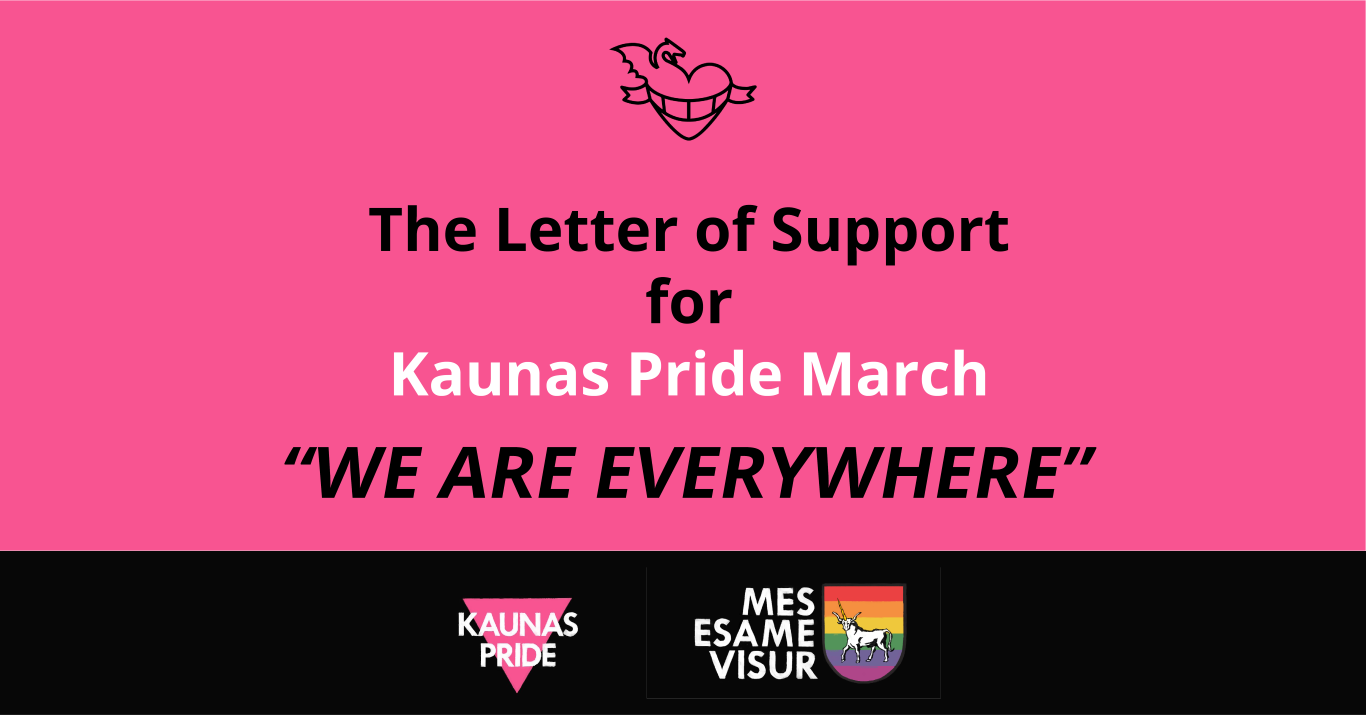 The organisers of the Kaunas Pride March in Lithuania are facing political obstacles with running their festival at the moment.

They are being repressed by the local municipality which is violating their right to gather. An organised plan of the route for the march was rejected by the Kaunas municipality after this group submitted three different requests detailing the possible routes of the march.* The authorities’ answer was that “the event would disturb traffic and local businesses”.** Even after the Lithuanian Administrative Dispute Commission recognised that the municipality violated the Kaunas Pride’s rights to assemble, nothing changed. Regarding recent news, the Kaunas municipality is at the moment appealing the court decision.

Kaunas has been also recommended as a candidate for the European Capital of Culture in 2022 and it is even more worrying that repression of this event is happening there. This title refers to European values that encourage development of culture and, most importantly, its main goal is to “preserve and promote the diversity of cultures in Europe and to emphasize their common features and to increase citizens’ sense of belonging to a common cultural space”.***

The independently-organised Kaunas Pride March, which is not supported or funded by any official organisation or company, is being organised by a group of local volunteers. It is the first Lithuanian Pride event outside of Vilnius and will take place on 4th of September as a part of the queer festival Kreivės.

As Kuusik states in their article Feministeerium: “Their slogan We are everywhere is a declaration of the fact that LGBTQIA+ people have existed and still exist all across the country and demand the right to live their lives in safety.”****

We are standing in solidarity with Kaunas Pride organisers as progress in the field of LGBTQIA+ rights has stagnated in recent years in the European Union, while public displays of hatred against the LGBTQIA+ community are on the rise.

We stand for the right for the civil society initiative of Kaunas to march, discuss their experiences and demand necessary legal and social protections.

We expect that the Ministry of Culture of the Republic of Lithuania will respond to this situation.

The growing oppression of LGBTQIA+ people in Europe is concurrent with the attack on the foundations of democracy. We increasingly see political representatives in Europe imitating repression and publicly sympathising with the politics of the so-called Visegrad Group; we are standing in solidarity with Kaunas and we are standing by their slogan:

WE ARE EVERYWHERE and we refuse to hide.

WE ARE EVERYWHERE and we demand to live our lives in safety and dignity.

WE ARE EVERYWHERE and we will not let our lives be controlled under the guise of traditional values.

WE ARE EVERYWHERE and we will not tolerate hate disguised as freedom of speech.

WE ARE EVERYWHERE and we demand legal and social guarantees for all regardless of gender identity, sexuality or marital status.

WE ARE EVERYWHERE, therefore we march at KAUNAS PRIDE.