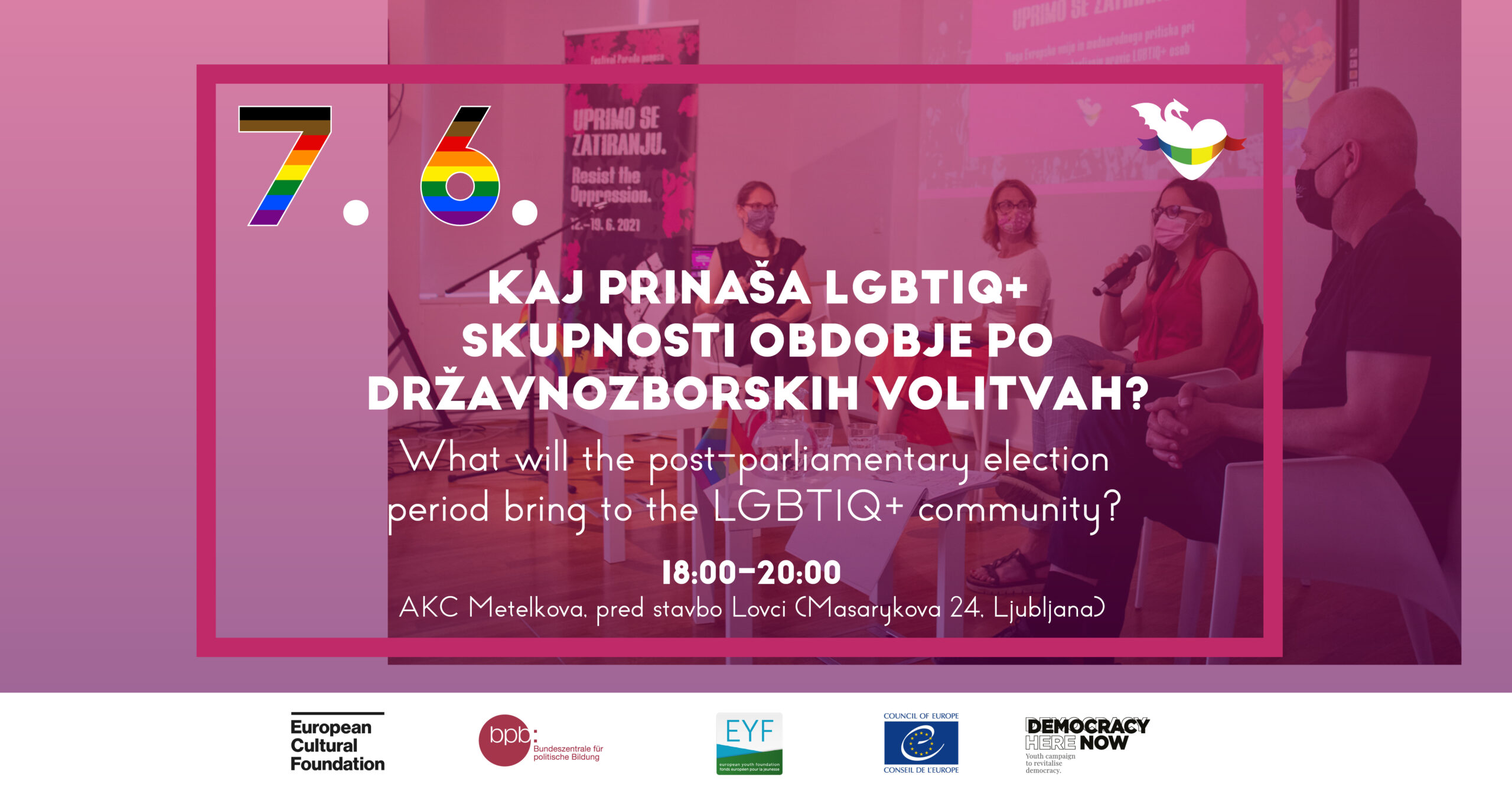 WHAT WILL THE POST-PARLIAMENTARY ELECTION PERIOD
BRING TO THE LGBTIQ+- COMMUNITY?

Event will be held in Slovene.

The parliamentary elections in Slovenia changed the course of history, which was written in the footsteps of Hungary, Poland, Serbia and other authoritarian countries. Two thirds of the nation voted against Janša and the right. The fact that we voted almost exclusively for one party that had the greatest chance of defeating the SDS may suggest that we wanted anything but the past two years to repeat. Still, we elected a new party, a new face, and completely neglected the parties that have been fighting for years against right-wing domination over the country.

At the round table, we will talk to activists, experts and representatives of movements that mobilised the masses to participate in the elections. We will ask them about the importance of the electoral outcome for the community and beyond, the assessment of the first steps of the new government and the ways in which LGBTIQ+ and other movements can be mobilised during this term.

*Alenka Kreč Bricelj, together with Maja Rijavec, leads the organization Smetumet. For the last ten years, she has been trying to understand garbage and similar inauspicious phenomena in the world. She still has more questions than answers. Her favourite methods of work are: building from the bottom up, putting things upside down, questioning authorities, and drinking coffee. The basis of her work is the design and sale of sustainable/zero waste products (bags from waste tarp) and leading various awareness projects.

*Lana Gobec joined Legebitra in January 2015. She was actively involved in advocacy efforts surrounding adoption of the Marriage Equality amendment in spring 2015 and later in the Marriage Equality referendum campaign in December 2015. Before joining Legebitra she was an intern for a Member of European Parliament and active in liberal political youth section. She mostly deals with LGBTI advocacy and awareness raising topics.

*Maja Cimerman is the General Manager of Danes je nov dan. She has been with the organisation since 2018, leading projects on accountability, transparency and opening public institutions. She is an accomplished debater with vast international experience in teaching debate and critical thinking.

*Tea Jarc, a member of the Initiative Voice of the People and a prominent participant in Friday’s protests, was an activist of the Mladi plus union at the beginning of her unionist path. She was later elected its president twice. She is mainly involved in the field of advocacy, both in labor legislation and youth policy.

*Simona Muršec has been the president of the Ljubljana Pride Association since 2015. She is a non-formal education trainer, a youth worker, an international relations major, a finance manager and a human rights activist. Among all the roles she performs on a daily basis, mobilising young people for social activism and the fight for a more just world are the most important to her.